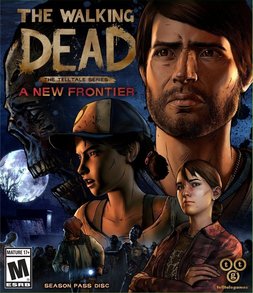 Telltale’s premier point and click style video game returns for its third installment. When the first season came out I was reluctant to play it but I eventually caved after it won multiple game of the year awards. I was not disappointed. The first season was great and is one of the few games to trigger an emotional response. A year later telltale started releasing season 2, which I felt is was underwhelming. When the third season, A New Frontier, was released I was a skeptic.

This season stars a new protagonist Javier. Javier was a pro baseball player who lost everything due to a gambling scandal so big even after the zombie apocalypse four years later people still remember. Javier is a charismatic character so based on your decisions you can get certain people to trust you or talk your way out of a situation. You quickly come into contact with an older and more antisocial Clementine. Javier, his niece, nephew, his brother’s wife and Clementine find a common goal and they travel together.

There is a pretty eventful start but after the game really slows down, mostly because they have to introduce new characters, backstories and factions in the setting. Character development is one of the best aspects once its established but it did feel like a chore getting to know some of the characters. Telltale did a great job slowly building conflict between Javier and his thought to be deceased brother David which boiled over beautifully in the last episode of the series. The game’s soundtrack was put together by Jared Emerson-Johnson. The soundtrack fitted the theme of the game perfectly and made the conflict scenes much better.

The Walking Dead: A New Frontier was much better than the second season and arguably the best work of Telltale today. It does have its slow times but its worth it in the end when everything comes together. If you’re a fan of the series I would recommend it or if have never played a telltale walking dead game I would recommend catching a bundle on sale for all of The Walking dead series together.