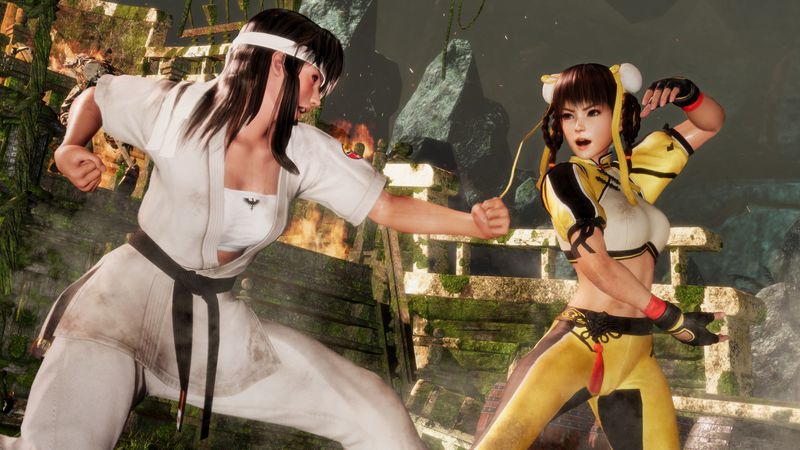 Dead or Alive 6 is the sixth installment of the DOA series. The best way to describe this game is “If it aint broke don’t fix it”. Team Ninja played it a little too safe with this game. With only two new original characters, a few gameplay changes and overall balance to the cast from the previous title. With all that said, its still a fun game. I haven’t played Dead or Alive since Dead or Alive 2: Ultimate on the original Xbox so I have a different point of view than the average DOA player who’s played every title since.

The story is a mess to say the least. I played through it and watched one of my favorite streamers play through it and I couldn’t explain to you why things happen they just kind of do. Its far from the standard that NetherRealm sets with their titles like Mortal Kombat and Injustice. But I would by lying to you if I told you I didn’t enjoy myself while playing it. I was laughing more at it then with it, but I still enjoyed it. The story gives you a reason to play every character at least once and a sense of what their personality is like. The voice acting was silly for the most part whether it was in English or Japanese. I wish there was an option to pick and choose who’s voices spoke different language instead of one or the other. I couldn’t stand Zach’s voice in Japanese but Ryu Hayabusa’s voice in English felt out of character. I was able to finish the story in a little over 2 hours, that includes watching each cutscene.  Before each chapter in the story you have the chance to play a tutorial with the character in case you’re unfamiliar with their moveset.

Speaking of tutorials, Team Ninja does an outstanding job making this game accessible. There is an in-depth tutorial that explains every mechanic the game has to offer. It ranges from the most basic of lessons to the advanced things you see players doing in tournament. Once you have the game mechanics down there is a training mode that lets you use every move the character has called “Command Training.” This is not only good for figuring out what character you want to main but also you can it’s a great way to learn the character that’s giving you a hard time online. Lastly there is the combo challenge. It teaches you the most important moves in the characters moveset and how to do basic to advanced combos with them. Since stages are important to how matches playout, this teaches you how to combo with stage hazards as well.

With such an amazing tutorial and practice modes, you would be surprised there are still button mashers online but there are. Its also too bad the only online mode available is ranked matches. There are plans in the near future to add a lobby system and player matches but for a triple A title, its unacceptable to launch the game without these. Hopefully it gets added soon or the newer players are going to be discouraged and play something else online.

Every character has personality and a uniqueness to them that makes them stand out from others. The only exception to this rule is Hayate and Hayabusa. They of course fight differently and have different playstyles but from the outside looking in they look the same. The roster is a nice size with 32 playable characters but only two of them being newcomers.

You get what you expect from a DOA title in this game. You get the infamous jiggle mechanic, lots of alternate costumes, arcade mode, time attack, survival mode, an amazing soundtrack and unique and complex fighting styles. Its just too bad the story is lacking and there is only ranked matches to play online.