The 5th installment of the classic Capcom series finally arrives. Devil may Cry 5 delivers on the over the top action, gameplay and characters we all grew to love from previous titles with some welcomed new additions.  You follow the story of multiple protagonist including, Nero the protagonist of DMC4, the mysterious V, and Dante the classic devil hunter. Each character has a unique fighting style and a movelist with tons of upgrades available. The story is straight forward and kind of predictable, especially if you’re familiar with all the other previous titles. Even if you aren’t the game offers a 10-minute explanation at the title screen catching you up on the story of the previous titles. The story was surprisingly solid.

The story was entertaining. To me the story felt like fan service in a good way. Questions I’ve always wanted answers to get answered, I’ve always wanted to see a more mature Dante, certain events centered around Nero and much more was delivered in this game. The story is roughly 15 hours, which is short for today’s standard of single player games.  Devil May Cry isn’t a game series like The Last of Us or Mass Effect. We don’t need a deep or complex story. We just needed a reason for the gameplay to exist in a way that makes sense and Capcom delivered that and more. The only problem I have is the structure. It feels like DMC 3. You fight up the tower, fight the big boss, then have to fight again to the top and fight the big boss again. That is a minor complaint because as I mentioned this series really shines with the gameplay. The story splits between what each character is doing throughout the story. It’s a nice touch to see how these characters interact with the human world being invaded, each of their personal goals and each other. Nico, the new character responsible for equipping Nero with different Devil Breakers, is a good addition. She has the over the top sassy, snarky personality that clashed with Nero’s hotheadedness. Nico felt like an older sister to Nero. Whenever Nero is being reckless she is the one that keeps him in check but the first one to offer him help.

Nero starts off basic but gets complicated with progress. He doesn’t have the difficulty of different styles or that much to micromanage but the more you progress the story the more Devil Breakers you unlock. Each devil breaker adds an extra layer to your playstyle, and some offer big advantages in boss battles. 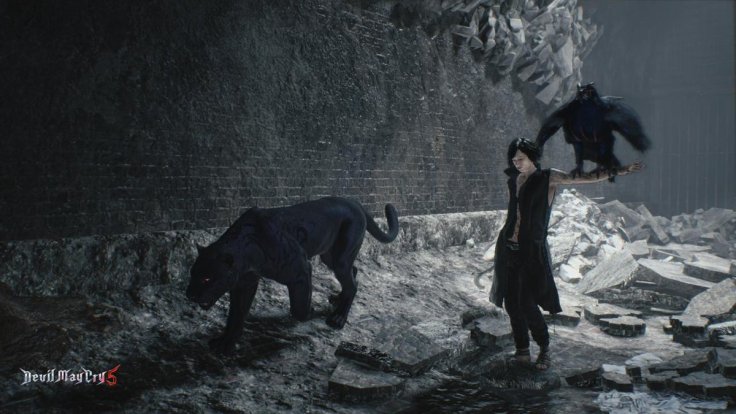 V fights with his three pet demons Griffon (crow demon specializing in ranged and crowd control moves), Shadow (A panther demon specializing in close combat with shapeshifting moves) and Knightmare(Strongest demon only available in Devil Trigger).  Managing Griffon and Shadow is simple since each of their attack are mapped to a button, but movement is where V gets tricky. Unlike Nero or Dante, V is slow and doesn’t have good movement. You can dash with V but you have to recall Shadow to do it. When you do you are only protected by Griffon or Knightmare if you’re in devil trigger. Same with floating. V doesn’t have access to a double jump skill, but he can float by holding Griffon but doing so you can’t attack or control him. V also must “finish off” downed demons since his pets can’t do it themselves.

Dante is the most complicated but rewarding character. He gets access to four different close range weapons, four ranged weapons and four styles that switches his fighting style. You can mix and match all of these of the fly, even mid combo, but it takes some practice to get used to it. Dante is still the same character I grew to love in previous titles, but he had a serious tone to him in some scenes. This is probably due to the stakes being higher in the story than ever before but its nice knowing what Dante is capable of if he gave a full effort.

DMC 5 also has a solid soundtrack throughout the entire game. My favorites include the cheerful Nico’s shop theme, “Any Special Orders” and the ominous V’s mission select theme “Enjoy the taste of Despair.” As I mentioned earlier my biggest and only complaint about this game is the camera during the boss fights. This is a problem in every Devil May Cry game but its not an excuse to give it a pass in this one. The bosses that were moving on the screen quickly were the biggest headaches. This is still a small price to pay for the overall greatness this game had to offer.

After finishing on the hardest difficulty available you unlock an even harder difficulty that mixes up the demon hordes for a somewhat new gameplay experience. It’s DMC’s version of a new game plus where your skill progress carries over. If you want even more content, Bloody Palace was added in a free update and its essentially a survival mode that allows you to fight hordes of demon and previous boss battles.

Devil May Cry 5 focuses on what makes the series great and capitalizes on it which is the gameplay. Capcom took a chance with making a new playable character that payed off. I was worried this game was going to be watered down but it feels even better than the previous titles in the series. It definitely one of my favorite games in recent years. The only thing holding this game back from perfection is the frustrating camera problems during boss battles. 9/10